Winter has arrived in the mountains of Maryland!

As I write this, we are expecting a winter snow storm to arrive with a fresh coating of snow over the next 48 hours. I have seen estimates ranging from 3” inches to 24” inches total but who is to really say? Storm systems have a way of “getting stuck” here in the mountains. Due to our higher elevations, we have colder temperatures and we are close enough to the Great Lakes to be affected by “lake effect” systems. Really!

Remember, though, that each year Garrett County receives over 100 inches of snowfall and we are more prepared than most areas, especially in the state of Maryland, to deal with this winter weather.

Note: especially when traveling, snow can accumulate quickly and ice can form on any surface. Be especially careful when entering and exiting vehicles, use all-wheel or four-wheel drive when possible and, ultimately, don’t be overconfident in your abilities for the conditions. Avoid sudden changes in speed and/or direction and take it slow!

Learn more about the resources our local roads department utilizes in preparation of the winter weather:

January 16, 2019, Oakland, MD – Garrett County Public Works – Roads Division maintains over 680 miles of roadways, or over 1,300 lane-miles, of county roads year-round. In the winter months, Garrett County receives, on average, 110 inches of snow each year. With a common law duty to maintain roadways quickly and safely during any precipitation, the Roads Division has become the best equipped in the state for winter weather.

Specifically in preparing for winter operations, the diverse pieces of heavy equipment, stockpile of road- treatment materials, and contracted staff must be organized about two months before the winter season. Garrett County usually receives the first snowfall in late October so the resources are generally accounted for by early September each year.

On a typical winter day with no forecasted snow or ice events there are two County-staffed shifts. Dayshift begins at 7:00AM and runs until 3:30PM with an average route of 35.2 miles. Nightshift begins at 5:00PM and runs until 1:30AM with an average route of 67 miles. The shorter routes take approximately two to two and a half hours to complete and the longer routes take approximately five to six hours to complete. If there is heavy snow, icy roads, or traffic, these routes will take longer. Also, if there is a weather event, the shifts are modified to 12-hours each so there will be 24-hour coverage for the duration of the snow or ice.

For treating the roadways the County primarily uses antiskid which is Type 1 #9 and #10 crushed limestone. In preparing for the 2018-2019 winter, about 30,000 tons of antiskid was stockpiled. This is estimated to last all season and, for an average year of snowfall, it’s estimated to have 100 tons remaining at the end of the season. For high-traffic areas and around schools, a mix of 30% rock salt and 70% antiskid is used. This mixture is needed to melt any snow or ice and add traction to the surface of the roadways. The Roads Division has to be cautious with the use of this mixture, though; when temperatures are below 15 degrees Fahrenheit the effectiveness of salt is limited and could even make the situation worse. Overall, there was about 1,200 tons of the salt mix stockpiled at the beginning of the current winter season.

Typically, before a significant snow event, the Roads Division is readying the equipment, testing pieces, and making sure everything is in good working order. During a storm, the department is focused on clearing snow and only applying abrasives as needed. Since the abrasives sit on the surface for traction, antiskid is most effective after the road has been plowed and on steep hills, tight turns, and intersections. Then, after a significant snow event, the teams may need to bring in a grader with side wings to push the snow back off the edge of the roads, use a snow blower for drifting areas, and/or use a payloader to open up intersections.

The Roads Division not only coordinates with other County agencies, but also with outside non-profits, community groups, and weather watchers. The Roads crews rely on the National Oceanic Atmospheric Association (NOAA) for the weather forecast. This allows for up to the minute weather specifically for Garrett County. Also, frequent contact with the County Emergency Management assures that prompt fire or emergency response is available. Note, if the County were to declare a state of emergency due to weather, the departments work closely together to create access to shelter locations and clear emergency evacuation routes.

Current winter road conditions can be determined by calling the main Roads Division at 301-334-7488 (during business hours) or by completing the form found at https://www.garrettcounty.org/roads/forms/inquire-of-winter- road-conditions. 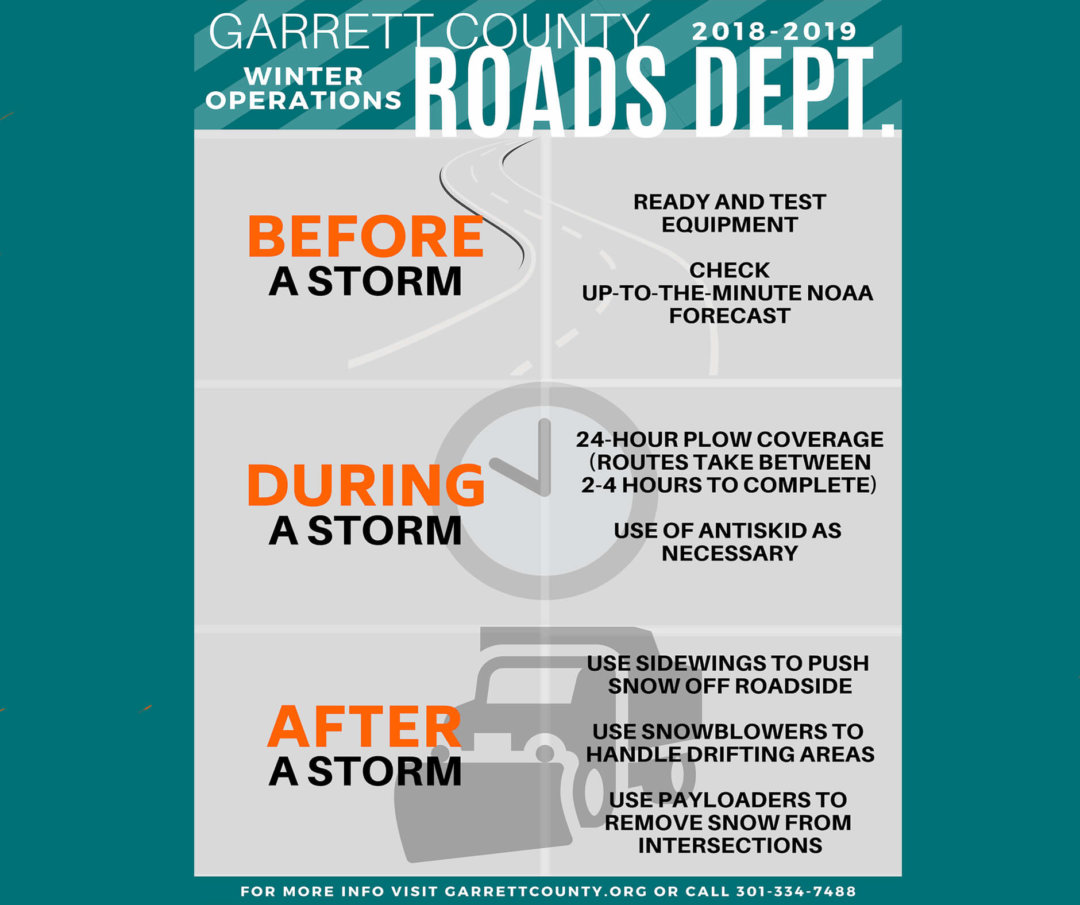